Trust in Australian development NGOs is on the rise

Public trust matters for development NGOs. They work in faraway lands. Their impacts aren’t immediately visible. They often depend on donations. If the public doesn’t trust them, funding will fall, and with it the ability to help.

Since 2017, often in partnership with the Australian Council for International Development, I’ve studied Australian public trust in development NGOs. I’ve done this by placing the following question in large, nationally-representative surveys run by well-regarded polling firms.

I last asked this question in December 2019, right on the eve of the coronavirus pandemic. At that point, trust in NGOs had effectively been static as long as we had been running surveys.

Last month I asked the question again, to discover that – all of a sudden – attitudes were changing. Trust has risen: by about 7%. As you can see in the figure below, the mean response in 2019 was 5.24. This year it was 5.65. 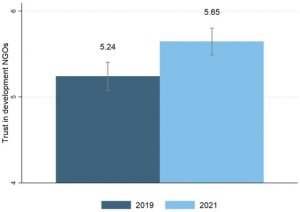 That may not sound like an eye-popping shift, but the difference is large enough to be statistically significant. (Large enough, in other words, that it almost certainly didn’t arise by chance.) What’s more, rapid changes are rare in studies of public opinion, particularly over a period as short as the one between December 2019 and May 2021. It’s also the largest change to occur while I’ve been gathering data. And if I look back further, using data from an Australian Charities and Not-for-profits Commission report, the only equivalent change took place over a longer period. It’s an unprecedented rise.

To some, a score of 5.65 might sound disappointingly low. But it’s not that bad. My question is a demanding one. I ask how much the respondent trusts NGOs to do the right thing “all of the time”. In addition, the average response is pulled down by the disproportionately high number of respondents who answer five on the 0 to 10 scale. Some of the fives will be genuine, but some are almost certainly people who simply don’t have a view. With fives removed, the most common responses are seven and eight.

Trust in Australian development NGOs was already quite high, and now it’s going up.

Why is trust in Australian development NGOs on the rise? The most likely answer doesn’t stem from NGOs themselves. Rather, it probably stems from a broader change: Australians are becoming more trusting in general. When I analysed which types of Australians were most likely to trust NGOs in 2019, by far and away the clearest correlation I found was with a general question about social trust that I also asked. Australians who trusted their fellow Australians were more likely to trust development NGOs. The relationship existed even when I accounted for the influence of age, education, gender, where people lived and political orientation.

And when I asked the general question about trust again in 2021, I found an increase that was very similar in magnitude to the one I found in trust in NGOs. 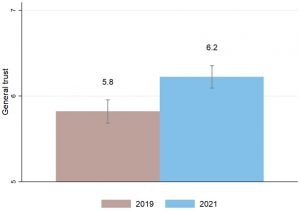 My findings do not appear to be unique. The Edelman Trust Barometer, which is fascinating, but which I would trust more if it came coupled with a clearer explanation of its survey methods, also finds increasing trust in a range of Australian institutions.

Trust is on the rise in Australia. This surprises me: in between headlines about anti-maskers, anti-vaxxers, lockdown avoiders and recurrent COVID-19 outbreaks, the last year hasn’t exactly felt nourishing for the trusting side of people’s nature. Perhaps though, away from the headlines, there’s a different story afoot in Australia – a story of rising cooperation and coordination in the face of a global challenge. Perhaps that’s why trust is higher now than it was in 2019.

Regardless, the good news is that the tide of rising trust appears to have influenced attitudes to development NGOs too. Australians are considerably more likely to trust development NGOs than they were a little over a year ago.

Summary data reported on in this blog, as well as a longer time-series of NGO trust data, are available in this spreadsheet.

This research was undertaken with the support of the Bill & Melinda Gates Foundation and the Australian Council for International Development. The views are those of the author only

Terence Wood is a Research Fellow at the Development Policy Centre. His research focuses on political governance in Western Melanesia, and Australian and New Zealand aid.